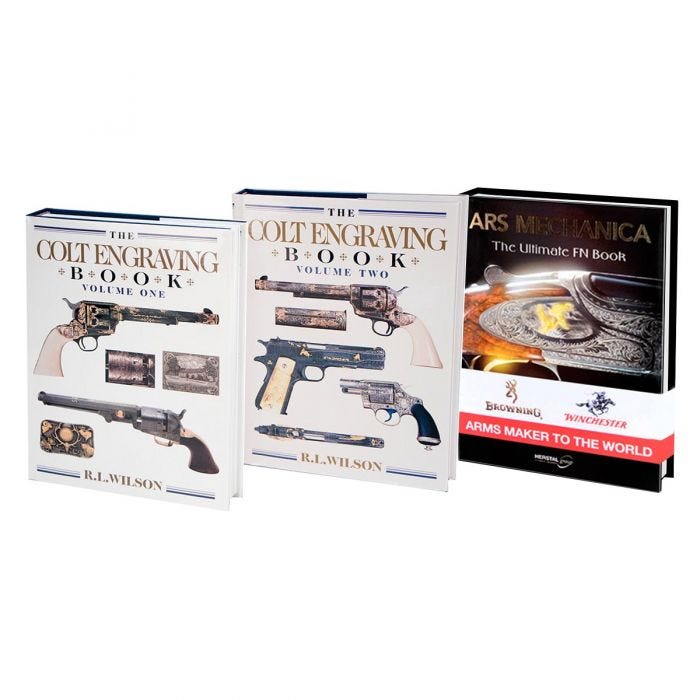 Colt Engraving Hardbound Books Volume I and II
This third edition from the original texts of 1974 and 1982 has been fine-tuned and dramatically expanded, and is by far the most illuminating and complete. With over 1,200 illustrations, more than 2/3 of which are in color, this book joins the author's The Book of Colt Firearms, and Fine Colts as companion volumes. Approximately 1,000 pages in two volumes, each signed by the author, and strictly limited to 3000 copies.

Volume I covers from the Paterson and pre-Paterson period through c.1921 (end of the Helfricht period). Volume II commences with Kornbrath, and Glahn, and covers Colt embellished arms from c.1919 through 2000.

Each volume is approximately 500 pages. Large 9" x 12 " vertical (portrait) format with approximately 650 illustrations, most in color.

Beautifully printed and signed by the author- A MUST FOR ANY FIREARMS ENTHUSIAST!

The authors, Auguste Francotte, Claude Gaier and Robert Karlshausen, have done a magnificent job representing all facets of FN's history, including its factories and affiliates such as Winchester and Browning. Many will recognize Mr. Claude Gaier, the well-known arms expert and curator of the Liège Arms Museum.

The book recounts FN's rich history like no other. Ars Mechanica is illustrated with over a thousand photographs, many previously unpublished, and is a visual feast for any FN and Browning collector.

For many it will introduce FN not only as the ultimate arms maker but reveal its rich history in bicycle, motorcycle and automobile manufacturing among many other successful product lines. These products, like the arms that bear the FN logo, were examples of technical excellence. FN's vehicle products held a number of world speed records, and continue to fuel the passions of motorcycle and automobile collectors.
Search engine powered by ElasticSuite